A brief history on liposuction

In 1977, a French plastic surgeon first introduced a blunt –suction technique for fat removal. He described his first case being performed as “a procedure of love” on a close friend who desired resection of a lipoma (a benign fat tumor) on her back. In this case his friend, who is an actress, expressed concerns regarding scarring for the removal of the lipoma, so he considered his options for shorter scar techniques. He came up with a unique technique that would allow for the suctioning of fat through a small incision. With the success of this procedure, blunt suction-assisted lipectomy or “liposuction” has become the primary means of body contouring as we know it today.

What are the different liposuction techniques are out there?

Liposuction has evolved over the past three decades into a major important technique in body sculpturing. There are many liposuction techniques that are in use today. The most common technique is the so called “traditional liposuction” technique which mechanically avulses fat cells using a suction device. This technique can be traumatic and often results in significant bruising, postoperative pain, local tissue necrosis, and a lengthy healing process. 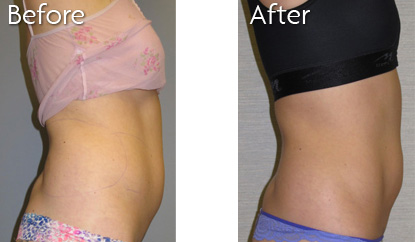 View before and after images of actual patients.

What is the latest liposuction technique of the 21 st century?

A new technique of liposuction called laser assisted liposuction, also known as Smartlipo, utilizes a meticulously calibrated laser at two wavelengths in removing fat. The first laser (wavelength at 1440 to 1030nm) targets fat cells and the second laser (wavelength at 1320 to 1060nm) has affinity to blood cells. With these two lasers, Smartlipo melts fat cells and coagulates the blood vessels. This allows for non-traumatic fat removal which results in diminished bruising as well as bleeding, while at the same time tightening the skin. Smartlipo allows Dr. Goldberg to remove fat and its oily substance through small incisions. The patients experience immediate results with less bruising, swelling, and bleeding. More importantly, the skin tightening will continue to improve over the next few months.

The advantages for SmartLipo:

Who is a candidate for SmartLipo?

Smartlipo is ideal for individuals who already lead a healthy lifestyle, but are having difficulty eliminating excess fat through exercise and diet. Most patients who undergo the procedure are generally 20-25 pounds overweight. In fact, SmartLipo is an affordable way to achieve a pleasing physical appearance and eliminate extra pounds, permanently. To determine whether you are a candidate for Smartlipo, Dr. Goldberg will review your medical history, aesthetic goals and expectations. Dr. Goldberg will explain both the benefits and the risks of SmartLipo with each patient during the consultation appointment.

SmartLipo is often called “Lunch Hour Lipo” because it requires minimal recovery time. Dr. Goldberg recommends that patients take one to two days to recover. However, most of her patients return to their daily activities one day after the procedure. Patients are asked to wear post-surgical compression garments and bandages to aid in the healing process for one to two weeks.

View Before & After Gallery

Contact us now to schedule a consultation or book your next appointment.